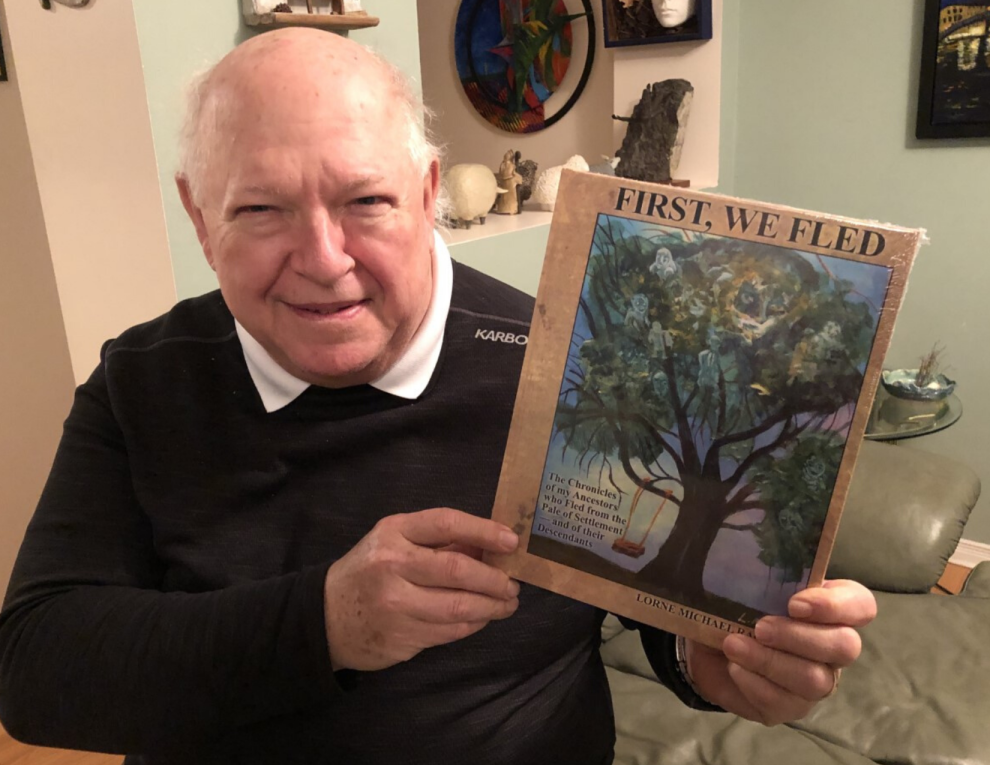 In his new book, retired educator Lorne Rachlis, a past-president of Temple Israel of Ottawa, traces his family’s history from his great-great-grandparents in the Pale of Settlement to his own grandchildren. In this article, Lorne tells the story of how the book came to be.

I have written a history book. It is not a traditional history book, written from the point of view of kings and generals. It is the story of six generations of my ancestors and their extended families. It is history told through personal documents, personal memoirs and the reminiscences of dozens of individuals who are related to me and who lived their lives during the major events of the past 200 years.

The story begins in the early 1800s in Eastern Europe in the area of Imperial Russia known as the Pale of Settlement. My paternal great-great-grandparents, Ashkenazi Jews, lived in a small village in the Pale where their own ancestors may have lived for as long as 400 years. The story continues with their grandchildren joining millions of their landsmen to ﬂee the Pale during the late 19th and early 20th centuries to any country that would let them in. Once they are settled, the story follows them through the Great War, the Second World War, the creation of the State of Israel, and up to the present day.

The history of this history book

The impetus for the book began in 2012 when I was visiting relatives in my home town of Winnipeg. At the home of my Dad’s brother, Harry Rachlis, I saw a wall full of framed black and white old photographs. In response to my question, “Who are these people?” he pulled out and unfolded a piece of butcher paper on which was written in pencil in diﬀerent handwriting a rather large family tree that included me and my children at the bottom. Counting up seven generations from my grandchildren to the top of the tree, to what must have been the early 19th century, I found the names of my paternal great-great-grandparents, Lipa Lerman and Faiga Cantor. From them, the tree branched back down and out for several generations. It was a large piece of paper. 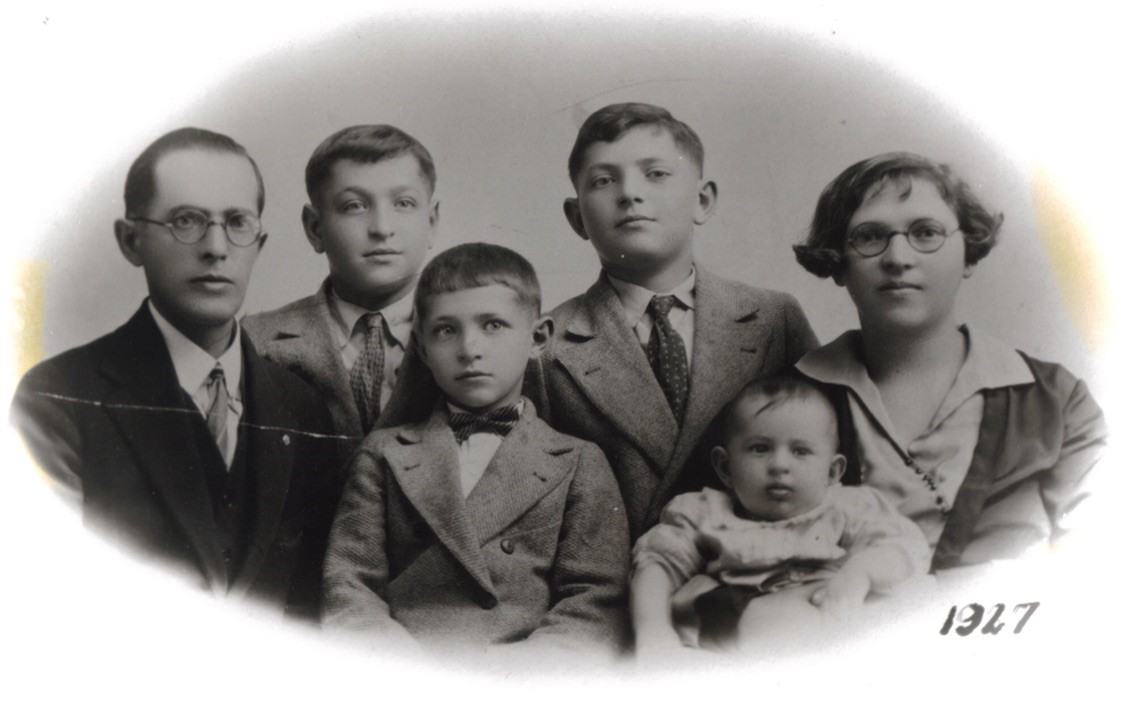 Lipa and Faiga lived near Kiev in what is now central Ukraine, in the village of Lyubar, in the district of Volhynia. I was almost 70 years old when I ﬁrst heard of Lipa and Faiga. They lived in territory conquered by Imperial Russia in a westward expansion in the early 1790s. Russia suddenly found itself ruling the largest concentration of Jews in the world. A century of czars restricted their livelihood and limited where they could live. It was a brutal existence.

The generation after Lipa and Faiga began to leave the Pale, heading north and then west, looking for a safer and more hopeful place to live. Once into Poland, a few headed to Palestine, but many continued to the English Channel and took passage overseas to any country that would admit Jews.

Among those leaving the Pale was my maternal great-grandfather Avram Kaplan. As did Lipa and Faiga, Avram also lived in central Ukraine, in the town of Mogilev, in the district also called Mogilev, with his wife and two children. In the 1880s, Canada was recruiting immigrants and the proliferation of steamship travel made transatlantic crossings accessible. Avram was in his late 20s when he left his family and took ship for Canada. He landed in Quebec City and boarded a train. The transcontinental railway was under construction to cross the prairies on its way to the Paciﬁc coast, and by this time had reached Brandon, Manitoba. Brandon was then a frontier town, open to newcomers, the kind of place where there was little established society and immigrants could begin a new life.

Avram changed his family name to Greenstone (why? Nobody knows), probably worked as a peddler and saved up enough money to send for his wife and two children. He opened a store, Greenstone Grocerie. Two more children were born, the ﬁrst being Maxwell, my mother Margaret’s father. 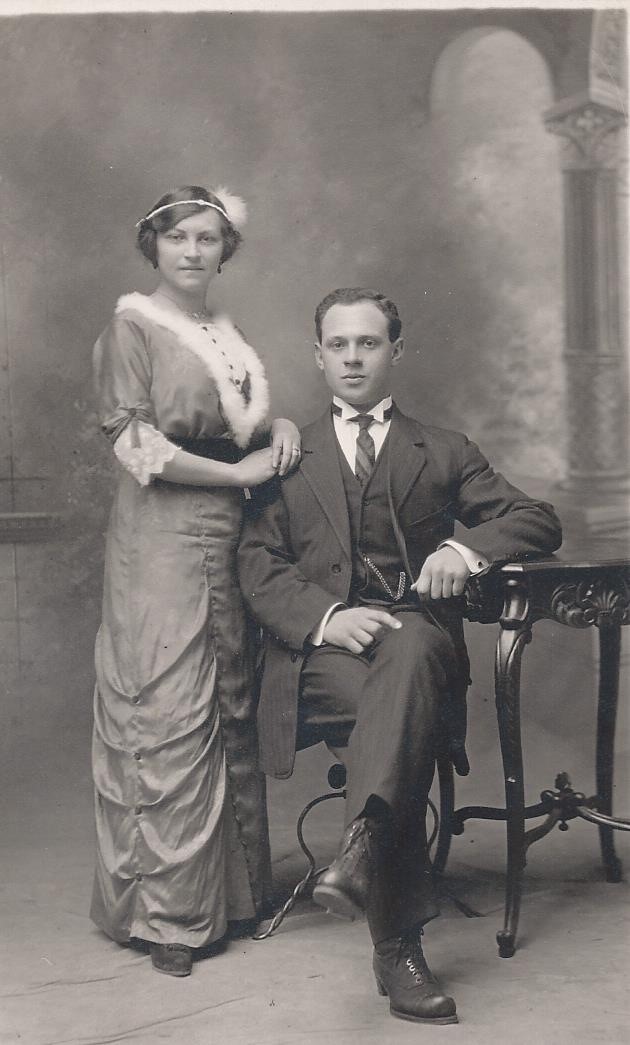 Meanwhile, back in the Pale, through and after the First World War, the centuries’ old violence against Eastern European Jews accelerated. My widowed paternal great-grandmother, Leah Lerner, ﬂed Lyubar with her seven surviving children. Her oldest child, my paternal grandmother Sarah, went to Winnipeg with her husband Leon and their three sons – Morris, Jack (my father) and David. Leon’s aunt had already settled in Winnipeg and helped them immigrate and get settled. Leah and the rest of her children had hoped to go to Palestine but, having little money, accepted Moses Monteﬁore’s subsidy and went to Mendoza, Argentina.

I organized the rest of the story so that each nuclear family of my parents’ generation has its own chapter. My parents’ brothers and sisters grew up in the 1920s and 30s. They lived through the Great Depression and the Second World War, saw the creation of the State of Israel and grew their own families in the relative safety and prosperity of the 1950s and ‘60s that continues in Canada through my generation.

In August 2017, after ﬁve years of searching, researching, writing and rewriting, I published a 250-page family history which I called Leaving Lyubar named after Lipa and Faiga’s ancestral village.

A few dozen copies were purchased by relatives and close friends. Once the book was out, I began to receive what turned into a ﬂood of comments, anecdotes, photos, newspaper clippings, audio and video recordings. announcements of births, weddings and deaths (and only three minor corrections!) from ﬁrst, second and third cousins, some of whom I had not known before the book was published. This family input expanded and gave more life to the personal stories and the research gave the stories additional context. The family trees were expanded and updated through the fall of 2019. I now had 100 pages of new material and the result is a 350-page second edition which I have called First, We Fled.

First, We Fled traces my extended family from the 19th century in the Pale of Settlement to the current day where I found their descendants, my ﬁrst, second and third cousins, living across Canada and the United States, and in Argentina, Israel, England and the Czech Republic.

First, We Fled features over a hundred illustrations, including 27 family trees that show the relationships within and between the families, maps, oﬃcial documents, newspaper clippings and photographs I took of houses where people lived. There are also photographic portraits going back 100 years, some of which trace individuals from childhood to senior citizen.

It was a labour of love. My only regret is not having started this project sooner, while people above me in the family tree were still alive. I hope you have as much pleasure in reading the book as I had in putting it together.

How to get a copy

First, We Fled is available only on-line. It is priced at publisher’s cost and is sold by self-publisher Lulu. To get a copy, go online to lulu.com, click on ‘Shop’ and type in either the book title First, We Fled or my name. The book can be purchased in a black and white version for around $30 and in a full colour version for $90.

Photo 1: Author Lorne Rachlis holds a copy of his book, First, We Fled.