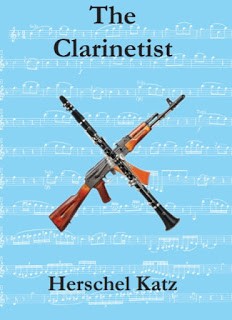 The Clarinetist is the first book by Herschel Katz, a former Montrealer who has lived in Jerusalem since 1984 where he is now retired after working as an urban planner for 29 years. His biographical notes also indicate he worked as a part time book reviewer several years ago and as a result of this experience, decided to try his hand at writing a story himself.

The novel he has written is a good first effort and seems to reflect some of his own interests. He is an amateur clarinetist and seems to have developed an interest in various aspects of the Holocaust. Against this background, Katz focuses on Danny Kahn, a 17-year-old Jewish teen from Montreal who is launched into an adventure in the winter of 1967, with all of these various elements playing a role.

Danny Kahn is the narrator of The Clarinetist and Katz does an excellent job of using the teen’s perspective. We are plunged into the story at a key moment when Danny his love interest. We soon discover that his father had died a number of years ago; that he lives with his mother and older brother; that he demonstrates mature judgment and behaviour and is often complimented for it; and finally, that he is a musician – a clarinetist – who has been given the chance to audition for a place in an international youth wind band to play in Israel over the summer, under the auspices of a Rubin Academy in Jerusalem.

Katz makes excellent use of Danny as the narrator, who does not give away what he already knows since the whole tale is told in the past tense.

As the tale unfolds we discover more and more about the teen narrator, his love of CSI, his fascination with detective stories and his keen ability to observe details in the appearance and behaviour of others. His mastery of music and his keen interest in the past, as well as his attention to detail are just what is required for him to figure out the mysteries he is presented with and to survive the threats to his life he meets along the way.

Except for two later chapters that do not further the main plots, the story gallops at a fast pace in the other 25, with new mysteries and dangers at almost every step. His girlfriend’s father is a lawyer for the mob who implies there was something not on the up and up about the way his father did business. He is given a tip that “the Mossad” will be present at his audition and their judgment will be part of the selection process. He is later given a mysterious key to deliver to a particular individual in Israel, by an attractive older woman. Just before he leaves he is asked by his aunt to be on the lookout for his first cousin, Charlotte.

He is accosted on the airplane by a beautiful stewardess and is given a note from someone claiming to know his father. He will soon discover that not everyone is who they claimed to be.

The 17-year-old teen has a kind of mutual attraction with a number young women, including the stewardess, who bestow kisses and hugs upon him, a few offering more, in addition to giving him clues to solving all the mysteries he is presented with. And although he resists their attractions, almost every one of them indicate that his girlfriend “is very lucky” and promises their availability for a relationship if the one with his girlfriend does not work out.

Some of them actively help him carry out everything he needs to do in order to solve the mysteries as well as save his first cousin, Charlotte, and his love interest, Naomi, from danger.

There are a number of coincidences in the novel which give Danny exactly what he needs at exactly the right time and of course some of these have already been set up by Danny having the very specific talents and interests he has previously demonstrated, including familiarity with Hebrew biblical texts.

In end, Katz has created a rollicking adventure of a stellar young man, irresistible to young women and mature beyond his years, who through mystery and danger, finally solves the mystery of his deceased father’s role in history and the issue central to his own adventure.

Contact Herschel Katz at katz1401@gmail.com for more information or to order a copy of The Clarinetist.