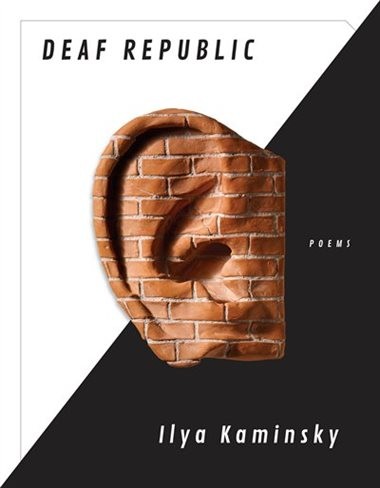 Ilya Kaminsky was born in Odessa in 1977 to a Jewish family. He lost most of his hearing at the age of four from mumps and inadequate medical treatment, and started writing poetry in Russian. His family moved to the United States when he was 16. He did not yet know English, but he worked on it, and started writing English poetry. His first book of English poetry, Dancing in Odessa, was highly praised and won important awards. Deaf Republic is his second full-length book of poems in English.

Poetry is an art that depends on sound. There have been blind poets – like Homer and Milton – but it is hard to think of a deaf poet. Kaminsky challenges that handicap in two ways: writing in a language that he does not hear; and that he did not speak, read or write until his late teens. It is early to tell for sure, but he may be an important poet, who meets his handicaps by pushing poetry in new directions. Deaf Republic is a collection of 59 short poems that tell a story and script a play – in fact, a puppet play.

There is little of the traditional devices of poetry such as metre, rhyme, alliteration, or onomatopoeia. The rhythm of the language is tight, with characters saying what just happened, as soon as it happened, in a world that is dangerous. The characters are the townspeople of Vasenka, an occupied town, who tell the story; Sonya and Alfonso, the puppeteers; Galya, the owner of the puppet theatre; and the soldiers.

The story begins when Petya, a deaf boy, possibly not very bright, spits at the sergeant. The line that follows is, “The sound we do not hear lifts the gulls off the water.”

That is a good example of Kaminsky’s technique. The people of the town go deaf, which is not difficult for puppets: “In the ears of the town, snow falls.”

Those themes, deafness, the dead boy, snow, frightened birds, repeat throughout the book, but always with restraint. The restraint is a background against which eroticism startles:

I don’t know anything about you –

except the spray of freckles on your/

The poems are free verse, not rhymed, but there are occasional rhymes of opportunity:

Or the marvellous short poem, “Elegy”:

Vasenka is an invented town, but the things that happen there are obviously stimulated by the memories of a Jewish boy from Odessa. It is typical of immigrant writers to write at the same time about the old country and their new home. The last poem in the book is “In a Time of Peace.” It has this:

“Ours is a country in which a boy

shot by police lies on the pavement

You just have to watch the TV news.

In the year 1500, the great Renaissance scholar Erasmus wrote, “In the country of the blind, the one-eyed man is king.” Nobody since has come up with a matching aphorism about a one-eared man. Kaminsky, in an endnote to Deaf Republic, writes, “The deaf don’t believe in silence. Silence is the invention of the hearing.”