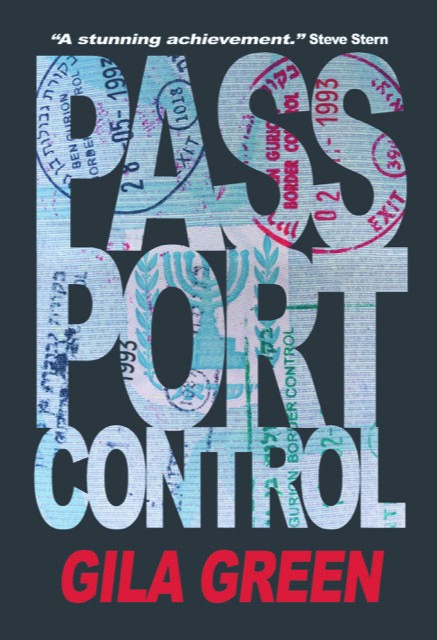 It is 1992 and Miriam Gil, a 20-year-old university student is living at home in Ottawa with her widowed father, an Israeli who moved to Canada before meeting his future wife, Miriam’s mother.

Miriam’s mother had died five years earlier in a car crash and now her father finally seems ready to move on. He has invited his new girlfriend, Jacquie, to move in, but the last thing Jacquie wants is to share a home with Miriam. Her father lets Miriam know that it’s time for her to move out. Miriam, who has never been to Israel, decides to transfer to Haifa University thus setting the stage for Passport Control, a compelling story encompassing identity, politics, religion, culture clash, family dysfunction, friendship and love in the Israel of almost three decades ago. The book is written as Miriam’s first-person account of the events in the story and her reactions to them.

Like her character Miriam, Ottawa-born author Gila Green is the daughter of an Israeli father and Canadian mother, although she graduated from Carleton University before moving to Israel. She is also a graduate of Hillel Academy and Sir Robert Borden High School. I reviewed her earlier novel, King of the Class, in the August 26, 2013 edition of the Ottawa Jewish Bulletin.

Arriving at Haifa University, Miriam finds herself living with Jewish Israeli students, a Druze, a Palestinian, and an American, some of whom don’t get along well with each other. One of the Israeli roommates quickly lobbies Miriam to sign a petition demanding that the Palestinian student be removed from their quarters. At first, the idealistic Miriam resists signing a petition she knows is motivated by nothing but prejudice, but eventually she acquiesces – a deed for which she feels nothing but guilt.

She also reaches out to her uncle, her father’s estranged younger brother. Spending Shabbat at Uncle Moshe’s kibbutz, she is hurt and puzzled by the emotional distance, even hostility, of Leah, Moshe’s wife, a highly placed Israeli bureaucrat. (Eventually she learns the source of the hostility: Leah was her father’s first wife and the marriage did not end well.)

During that Shabbat visit, Miriam meets and falls in love with Guy, a student and former Israel Defense Forces soldier who yearns for peace with the Palestinians. As the plot to Passport Control twists and turns, the love affair with Guy becomes the most hopeful of the relationships Miriam will have in Israel.

As the daughter of an Israeli studying in Israel, Miriam is advised to get an Israeli passport. But her passport application is rejected when the background check shows Miriam to be the daughter of a Syrian Christian mother and unknown father – plunging Miriam into a bureaucratic nightmare that soon leads to her expulsion from the university.

Amidst subplots involving Leah’s role in the sabotage of her identity, and a tragic terrorist incident, the expelled Miriam finds herself in the crowded streets of the Old City of Jerusalem with Valerie, her American student friend, as throngs of Christian pilgrims mark Christmas Eve. Trying to make their way to the Kotel, Miriam and Valerie get caught up in a brawl between Palestinians and a group of Orthodox yeshiva students. While Miriam was roughed up in the brawl, Valerie was stabbed to death.

When the initial police check of Miriam’s identity again shows her to be Syrian Christian, she briefly becomes a suspect in Valerie’s murder.

In a period of a few short months, Miriam lives through difficult and complicated circumstances that eventually reconcile through the ultimately repaired bond of daughter and father and the imagined promise of a future with Guy. It’s a complicated story, but Green is a skilled writer who weaves Passport Control into an absorbing page-turner.