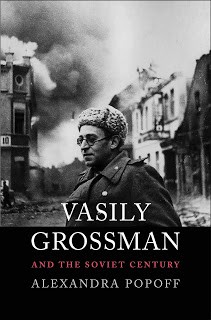 Vasily Grossman and the

Early in the Soviet era, Joseph Stalin raised a glass to writers as “engineers of the human soul.” It was up to the writers to understand the obligation to the state that such praise carried, especially if they were Jewish and didn’t drink so much.

Vasily Grossman was born in 1905 in Berdichev, Ukraine, the home of one of the largest Jewish communities in eastern Europe. The family was assimilated and comparatively well-to-do. Grossman became a chemical engineer and worked for some time as an engineer in the Donbass, while also writing. In 1936 he became a full-time writer.

He was a successful novelist by the time Germany attacked Russia, in 1941. For health reasons, he was not suited for military service, but became a war correspondent. He reported from the fronts during the terrible retreats of 1941 and 1942, and from Stalingrad during the siege. His great novel, Life and Fate, which is described as a “Soviet-era War and Peace,” is set during the Battle of Stalingrad. Grossman died of stomach cancer in 1964.

Alexandra Popoff, who was born and raised in Moscow, is a former journalist with expertise in Russian literature. She now lives in Saskatoon and has published previous prize-winning books. For this biography, she was able to interview Grossman’s daughter and other relatives, and others who knew him, and was allowed to use their archives, including many letters, as well as Soviet-era state archives which have become available.

I was able to read Life and Fate, and Popoff’s biography, at the same time, so I had them in counterpoint. Grossman was witness to the violence of collectivization in the 1920s, the terror of the purges in the 1930s, and the bungling and lack of preparation for war in 1941, as well as the suffering and struggle of the people and soldiers that enabled the Soviet state to win. Popoff’s book, besides being a life story of Grossman, is a lucid narrative of those events, and of how they informed Grossman’s work. The work includes, of course, much besides Life and Fate. There are a number of other novels, short stories and reportage.

Grossman, travelling with the Soviet forces, was among the first to see Treblinka. His essay, “The Hell of Treblinka,” is in The Black Book of Russian Jewry, edited by Grossman and Ilya Ehrenburg, which was suppressed by Stalin and published years later. The Black Book contains also Grossman’s report on the murder of the Jews in Berdichev, his home town, where his mother was trapped when the Germans came.

A theme in Life and Fate is antisemitism in the Soviet state. In an essay about half-way through the novel, Grossman wrote: “Antisemitism… is a mirror for the failings of individuals, social structures and state systems. Tell me what you accuse the Jews of – I’ll tell you what you’re guilty of.” Popoff notes that when a shortened version of the novel was first published in the Soviet Union, in 1988, this chapter was cut.

Another theme in Life and Fate is the similarities between the totalitarian systems under fascism and Bolshevism. Timothy Snyder, in his history, Bloodlands: Europe Between Hitler and Stalin, cites Grossman as an authority. Popoff tells how the book was suppressed, and the manuscript in fact arrested, by the secret police. She also tells of Grossman writing to Nikita Khrushchev to plead for publication. He was allowed a meeting with Mikhail Suslov, the ideologist of the Politburo, who told him the novel could not be published in the Soviet Union for 200 years. He was not saying the novel was false, but that its truth threatened the regime’s existence. Part of the story Popoff tells is how a manuscript was smuggled to the west and published there. Ultimately, the book was published in Russia under Mikhail Gorbachev, long after Grossman’s death.

The event that has been called “Stalin’s last crime” came in January, 1953. Nine leading doctors, six of them Jewish, were arrested and accused of being a terrorist group controlled by the American Jewish Joint Distribution Committee, and plotting to murder the leadership of the Soviet Union, including Stalin. Bulletins appeared daily in the press denouncing the doctors. In late January, 57 prominent Jews, including Grossman, were summoned to the office of Pravda and presented with a letter denouncing the doctors. Grossman yielded to the pressure and signed it. The letter was never published. Stalin died in March, and in April his successors announced that the “Doctors’ Plot” was false.

Popoff writes, “Although the open letter was never published, Grossman did not forgive himself for acting against his conscience.” She quotes the passage in Life and Fate in which Victor Shtrum, the character whose life experiences are similar to Grossman’s, signs a similar letter. In the novel, Grossman speculates on how people can be made to do such things.