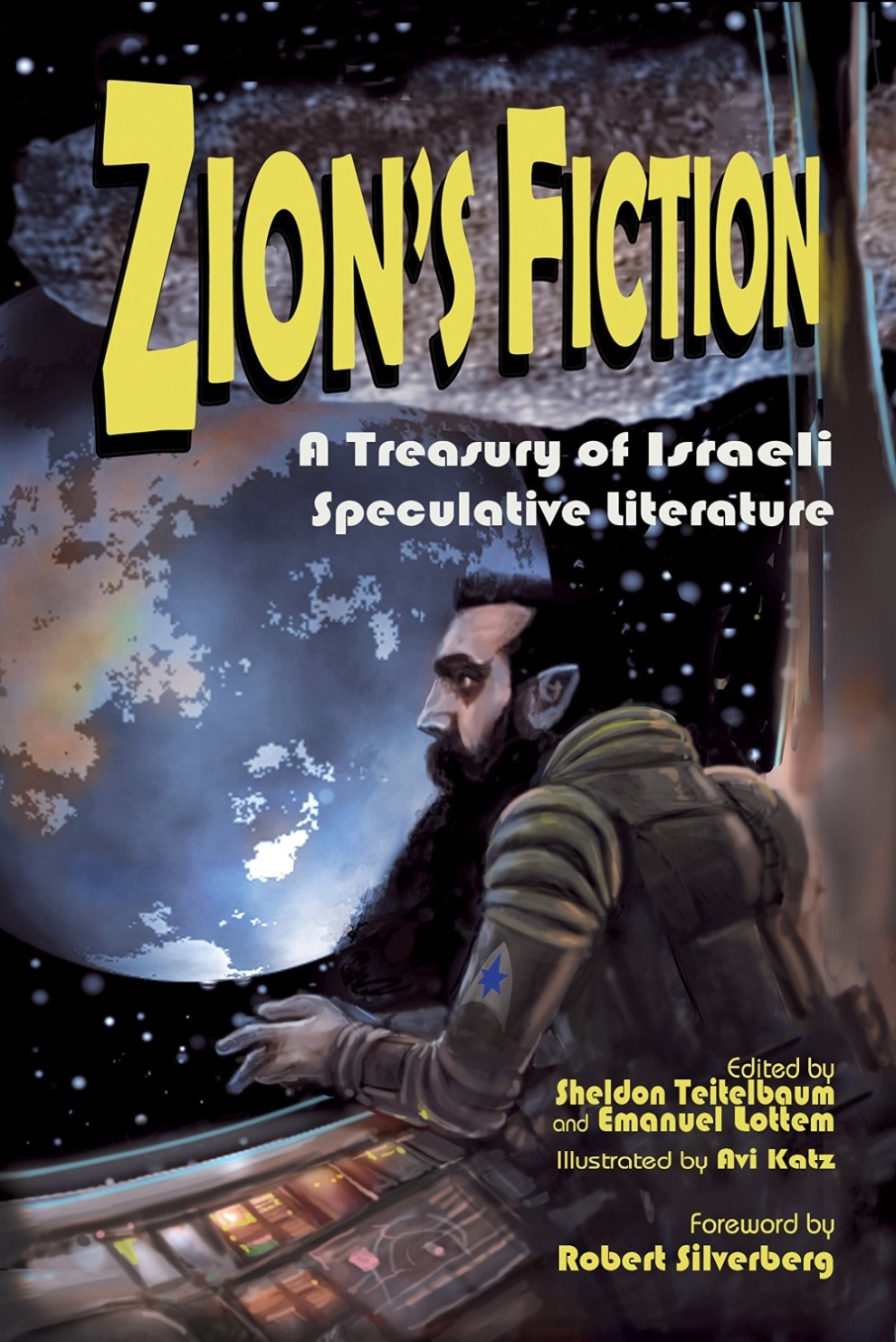 No, this is not a book about Israeli fiction. The title is a pun: Zion’s Fiction – science fiction. Get it?

Actually, the pun itself is a bit misleading, and is cleared up by the subtitle. Science fiction is fiction that deals with people’s responses to changes in science and technology. Speculative literature has a wider range, and may include also stories about utopias, or perfect societies, like Edward Bellamy’s Looking Backward, dystopias like George Orwell’s 1984, or pure fantasies and stories of the supernatural.

This is a collection of 16 very good stories by different Israeli authors translated into English. There is also a scholarly introduction by the editors which begins with the proposition that the State of Israel is “the only country on the planet inspired by not one, but two seminal works of wonder: the Hebrew Bible and Zionist ideologue Theodor Herzl’s … utopian novel Altneuland (Old New Land).” The introduction goes on to give the history of science fiction and fantasy in Israel from the early days, when intellectual leaders, the “gatekeepers,” looked on it as shund (trash), up until today, when it has become respectable.

I grew up on American magazines including Astounding Science Fiction (oddly, later changed to Analog), Amazing Stories, Weird Tales, Super Science Stories, The Magazine of Fantasy and Science Fiction. I got used to space travel, time travel, robotics, alien life forms, inventions and disasters, some very good writing and some not so good. In this collection there is a story, “Hunter of Stars,” with the best opening line I can remember: “The night all the stars winked out, I was born.”

Here is space travel, as an Israeli writer sees it: “On his neck the aug breathed softly. He had picked it up in Tong Yung City, on Mars, in a back street off Arafat Avenue, in a no-name clinic run by a third-generation Martian Chinese, who installed it for him.” “The Slows” is a story that first appeared in The New Yorker: “But then the woman turned back to me: she was holding a human larva strapped into a carrier, which she laid on the table.”

Then there are “The Stern-Gerlach Mice,” the result of too much beta-radiation by a biophysicist in pursuit of The Truth: “They turned out to be the uncontested champions in running through mazes in search of bits of cheese.” But these mice also have the ability to became as big as donkeys and ransack houses in Jerusalem.

The same story has a robotics problem that is peculiarly Israeli: “The tin beggars learned to watch their steps on the holy day, since the time some metallic unfortunate started cleaning a street in Me’a She’arim as a gesture of good will. It was Shabbat, and the worshippers emerged from their synagogue to tear it to pieces, leaving behind only tiny bits of metal.”

In Altneuland, published in 1902 a commonwealth comes into existence in the Middle East based on mass Jewish immigration from Europe and America, funded by wealthy Jews and productive enterprise by the new arrivals, and welcomed by the resident Arabs and the Ottoman Empire.  The editors are stretching things when they give the novel the status that belongs to Herzl’s Der Judenstaat and his organizational work, but the picture on the cover of this book is the same picture of Herzl as the one used in the 1960 English translation of Altneuland.

The artwork, by Avi Katz, is an attraction of this book, not only the cover but the block prints that introduce the stories. Another merit is the appendix of capsule biographies of the authors and other contributors.

The first line of a story is quoted above. The story is strong enough that it won’t be spoiled by quoting the last line: “I whispered into the black sky: ‘Orion, my shining friend, I will always follow you. Like you, I will be a hunter of stars.’”