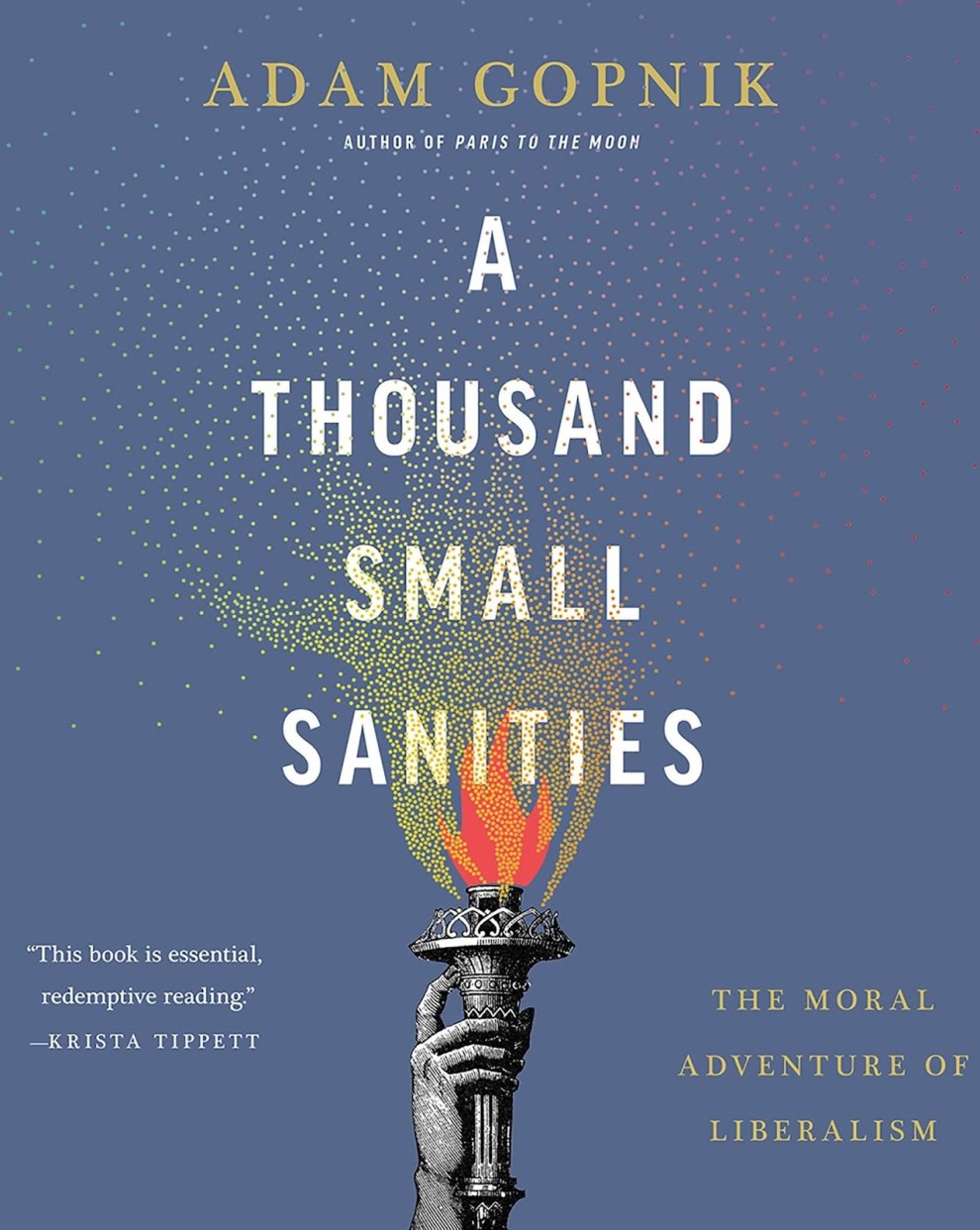 Book Review: ‘Pragmatic progressivism and politics as the art of the possible’

A Thousand Small Sanities: The Moral Adventure of Liberalism

Adam Gopnik, a staff writer at The New Yorker, has written a personal and spirited outline of his view of liberalism, illustrating how it has been developed and practiced by those he sees as liberal precursors and heroes, and then by attempting show what it is not.

His first definition of liberalism presents difficulties from the beginning and he starts by limiting it to “those of us who think of ourselves as liberal humanists.”

Liberalism is an evolving political practice that makes the case for the necessity and possibility of (imperfectly) egalitarian social reform and even greater (if not absolute) tolerance of human difference through reasoned and (mostly) unimpeded conversation, demonstration and debate.

Admitting the vagueness and lack of clear specificity, Gopnik then proceeds to use the lives, personalities and writings of those he most closely identifies with the admittedly evolving liberal tradition, often coupling those who worked together such as John Mill and Harriet Taylor, or George Henry Lewes and Marion Evans (George Eliot), but also William Gladstone and Benjamin Disraeli.

The starting point of all these examples is the need to move towards social justice within our democratic structures. To narrow down further what he means by liberalism, Gopnik introduces the notion of fallbilism and sympathy for others as central to liberal practice. Humans are often wrong and those who are ‘right’ need to show compassion and sympathy for those who cannot change as fast as others.

Ultimately, his liberalism is marked by pragmatic progressivism and politics as the art of the possible in a democratic society.

Gopnik further tries to separate liberalism from those ideologies both to the left and the right, finding both rigidities antithetical to both liberalism and to long-term change. Both of these make sweeping condemnations of certain categories of humans and seek to impose change through revolution or oppression.

In a way, Gopnik is illustrating the challenges for all those who want to avoid conflict, divisiveness and the cruelty of victors to losers which ultimately is overturned in a continuing cycle.

Strangely, the considerations he speaks of have been germane to Jews throughout their history: Separation or integration? Egypt or Assyria? Resistance/revolution or compromise and obéissance? Notice the seeming contradictory advice of Isaiah and Jeremiah, one for resistance, the other for surrender.

Jews in the Diaspora have long had other political dimensions that press upon them: Associate with the powerful or the ordinary person? The linguistic majority or the minority?

In the end, just meaning well and wanting to avoid conflict does not predict which course of action is called for in a particular situation nor whether any individual Jew will be more for change or for tradition. Have we yet learned how not to let these myriad questions divide us?

Gopnik’s definition of liberalism indicates why things inevitably fly apart, why the centre will not hold.

Every one of the words he includes in brackets can have many answers. Thus neither the upper nor lower limit of tolerance of difference is set. How egalitarian is good enough, and what do we even mean by egalitarian? Under what conditions and using what tools should debate be impeded? Boris Johnson’s actions might even be acceptable except that it could interfere with other current desires of liberals. And as Gopnik himself notes, decisions are not just made on the basis of reason, but also of emotion.

The final sine qua non of Gopnik’s liberalism is pluralism. Everyone can be included except those who are opposed to it. Yet here we have another one of those disputable terms. Does pluralism apply to everything and which aspects of religious practice or belief go beyond the “tolerance” limit?

Indeed, it is likely that many of Gopnik’s liberal heroes would have what are now considered “illiberal” views about at least some topics. Superiority of European civilization? Differences of races? Same-sex marriage?  Fluid gender identity? And even Gopnik has reservations about pushing some of these rights in ways that might be coercive.

Gopnik is right in noting the urgent need for liberals to combat the extremes of fascism and violence. But should we not also encourage those closer to the middle to make common cause?

Gopnik, a kind of Jewish Canadian American (he was born in the U.S. but grew up in Montreal and graduated from McGill University), has clearly been influenced by his Canadian experience and one could wish that his warm humanism prevails. The 2019 elections in both Canada and Israel may have a strong impact on the kind of liberalism he favours.

Rubin Friedman is a former senior manager, multiculturalism, for the federal government; a former director of government relations for B’nai Brith Canada; and a former cabinet appointee to the Canadian Race Relations Foundation.