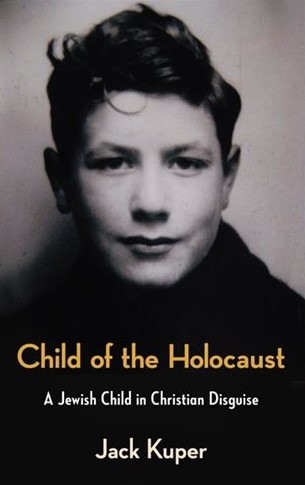 Book Review: A journey to find both hope, and oneself

Child of the Holocaust: A Jewish Child in Christian Disguise, Jack Kuper’s autobiographical memoir was originally published in 1967. A new edition, with a new foreword by the author, has just been published.

Shortly before Kuper’s book first came out, Jerzy Kosinski published his novel, The Painted Bird, which became a sensational and sensationalist success. Both books deal primarily with the experiences of a young boy alone, facing the multiple dangers of Eastern Poland: Nazis, local partisans of the left and right, local villagers and farmers who had negative perceptions of Jews and were themselves under threat from the Germans for harbouring Jews, Gypsies and other “enemies.” Even the weather held its own menace.

But Kosinski’s fictional narrator was left alone in 1939 when he was six. Every experience is marked by pain, torture, death and sexual sadism. He describes everything in a flat monotone and makes almost no effort to understand others. He shows no insight into his own motives. The net effect on the reader is sheer horror and wonder that a child so damaged could ever find life meaningful.

Kuper was left alone with a Polish family in 1941 at age 10. He was named Jankele Kuperblum and spoke Yiddish and urban Polish. Kuper narrates the story with a conscious effort to describe the thoughts and feelings of Jankel, while indicating that he is no longer that person, one of the challenges of writing a memoir of a past-self.

Unlike Kosinski, he empathizes with the farmers and villagers who hide him and fully understands why, at times, they send him away to look for help elsewhere. The boy is naive, but learned fast and demonstrated ingenuity by finding ways to survive as in his use of Jesus to avoid letting others see his circumcision.

Yet he is conscious of the brute violence involved in rural life, from the slaughter of a pig to the drowning of deformed kittens by throwing them into a pond inside a bag weighted down by stones, and the actions of boys to kill frogs or chase down a “Jew” just for fun. He laments that he himself cannot seem to be as cruel as his companions and berates himself for his weakness. One of the kind Poles who shelters him tells him, “You’ve got to learn how to kill, son. It’s part of life.” One family is marked by physical beatings but it is the exception.

He is also constantly reminded of the negative stories and stereotypes many Poles held about Jews. Even the Poles who risk their lives to save him share in these ideas: Jews are all rich; Jews use the blood of Christian children to make bread; Jews are only interested in money; Jewish women are built differently from Christian women; Jews killed Jesus and are being punished.

Because of these attitudes and because some Jews are killed when returning to reclaim their property, even after the Soviets liberate their territory, he is cautious about identifying himself as Jewish. Indeed, to protect himself, he has taken on different Polish names and identities in moving from village to village. After he is free, he is not sure of his identity. Is he Jankele, Kubus, Franiu, Zygmunt? He goes back to visit the families who protected him but he cannot find himself there.

He describes the external pressures and internal processes, which lead him gradually away from the dangerous and hated Jewish identity towards a Polish Christian identity, to speaking the local Polish rural dialect and to a moment when he realizes he has forgotten how to speak Yiddish.

Negative ideas began to affect his own view of himself, so much so that he is ready to convert – but the priest refuses to go through with it until after he rejoins a Jewish community. The gradual change he feels in his own thoughts is documented and takes the form of an inner debate between competing voices. At the end, when he is in a Jewish orphanage, he still crosses himself before meals, prays to Jesus before bed and at one point curses his fellow Jewish orphans.

After a violent confrontation with the others, he approaches a church with a like-minded friend in order to be baptized. At the last minute, though, he refuses to step over the threshold. He returns to the Jewish community centre. After hearing a Yiddish lullaby that he remembers, he writes “Jankele Kuperblum is alive.”

He notes that someone could find him. “It’s possible. Everything is possible.”

This is a story not of horror, but of a journey to find both hope, and oneself.