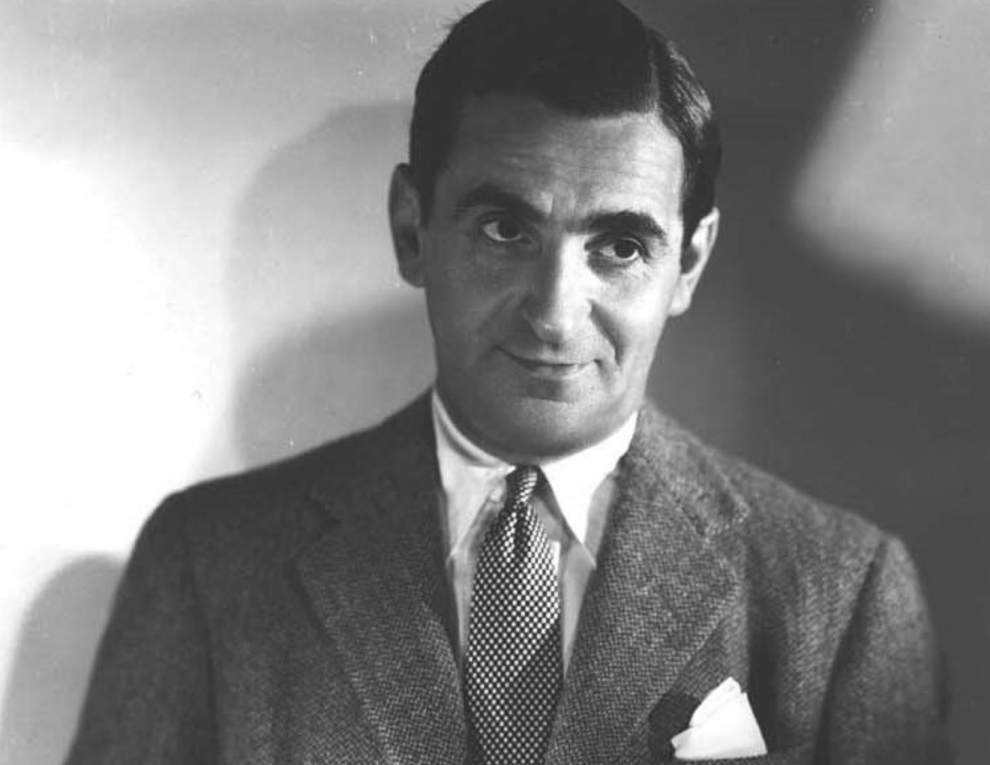 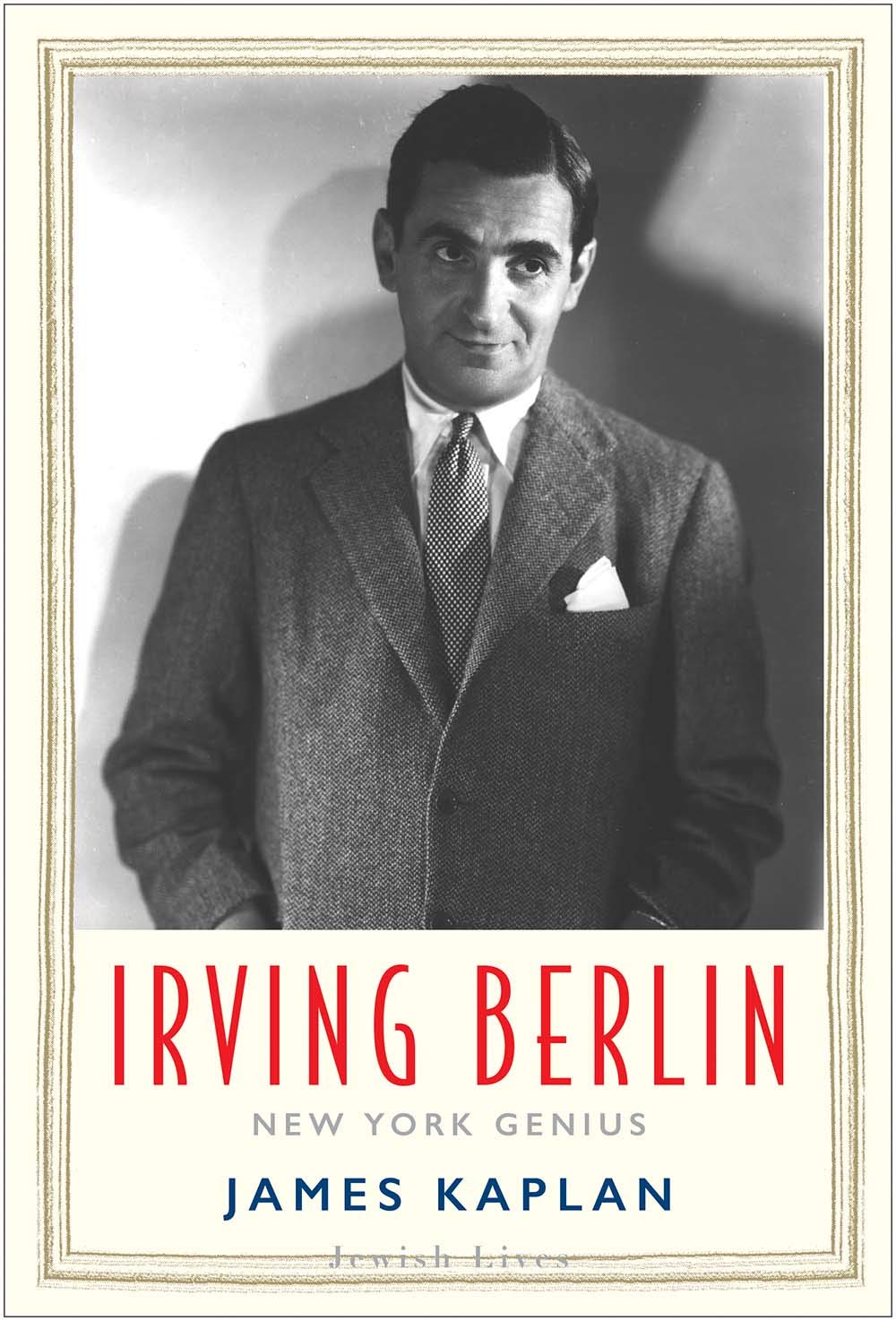 The jacket for Irving Berlin: New York Genius shows a small man of middle age, neatly dressed, who might well be a bookkeeper, or a Jewish insurance salesman making an important call. The frontispiece, just inside the book, is a different picture: “Portrait of the artist as a young titan. Just 26, Berlin is immensely successful and powerful – but his bold gaze disguises deep self-doubt.”

Israel Beilin, or Baline, was born in Siberia, on a date said to be May 11, 1888. He arrived in the U.S. with his family, two parents, six children, of whom he was the youngest, on September 14, 1893. They settled in the Lower East Side of New York, “in a windowless three-room cellar with no running water, the privy in the courtyard.” The father was a cantor, and tried other trades – butcher, painter – but never made a living.

Author James Baker is a Jewish writer born in New York, who got his start at the New Yorker. He has made a career out of show business biographies and profiles, including a two-volume biography of Frank Sinatra. He is well qualified to write this biography, which was commissioned by Jewish Lives.

Izzy – as Berlin was known as a boy and young man – seems to have started work at about age eight, as a newsboy, hawking the New York Journal in the Bowery, “half a cent per paper sold.” He found out he could sing, and that customers might throw him an extra penny or two for a song. His father died when he was 13.  Berlin quit school and moved out, finding work where he could, living mainly off tips, and sleeping in Lower East Side flophouses. Baker is careful to say that the details of Berlin’s early life are undocumented, and a lot of the story depends on Berlin’s own reminiscences, which varied over the years.

At 15, Izzy got his first steady job, as a singing waiter, at $7 a week, plus tips. He could charm the crowd with improvised dirty lyrics for popular songs. That year, he wrote the lyrics for a song that actually got printed. In the early years of the 20th century the music business was based largely on sales of sheet music. Izzy had the sheet music with his name on it, so he was a song writer, though that first song didn’t make any money.  At 20, he sold a song for $25, which made $25,000 for the publisher. Izzy learned the importance of copyright.

At about this time he stopped being Izzy, and became Irving Berlin. Why the name change? Kaplan says it was a matter of oysgrinen zich: becoming an American, no longer a greenhorn.

A music publisher, the Ted Snyder Company, gave Berlin a good-paying job, $25 a week to write songs. At first, he supplied lyrics for other people’s music, but learned that he could make the music himself. He wasn’t trained to write music, and dictated the tunes to other employees. Later, he had musical secretaries. It was hard work, a music mill, but there was enough money to move his mother and sister to an apartment in the Bronx.

Berlin said that he wrote “Alexander’s Ragtime Band” in 18 minutes, an alarming statement for somebody who takes longer than that to write a book review. Baker says it was more complicated, and shows what a hard and efficient writer Berlin was. Anyhow, that song was his first great hit. Two million copies were sold within a year. Irving earned $40,000 from this song alone in the first year-and-a-half after publication, “the equivalent of almost a million today.” The song was an international sensation. Soon Irving was a partner in the publishing firm, which became Waterson-Berlin-Snyder. He travelled to England, where he was already famous.

The rest of the story is of continued triumph, and also of the changes in the entertainment business, from sheet music and vaudeville to Broadway musicals and film. Irving Berlin wrote more than 1,000 songs, so some titles will surprise a reader who is not an expert (for me, “Blue Skies” and “Let’s Face the Music and Dance”). In the story we meet many of the other great writers of the time – George M. Cohan, Cole Porter, George Gershwin, Richard Rogers and Oscar Hammerstein, Lorenz Hart, Jerome Kern, and more. It is interesting that, whatever rivalry there may have been, Berlin seems to have been on friendly terms with them.

Ellin Mackey, a beautiful Catholic girl, made the first approach to Irving. She was independent, and a person of some accomplishment herself, as a New Yorker writer and later a novelist. Her father, a wealthy mining heir, was against marriage. When it became known that Berlin and Mackay might get married, they drew the kind of attention that royal dukes get, and ultimately got married in a municipal office. She died before Irving, after a long and successful marriage.

When Irving Berlin died, he left three happily married daughters, three sons-in-law that he liked, and nine grandchildren. Baker leaves it unclear whether any of them was raised or became Jewish, but quotes an interview with one of the daughters:

Berlin may have stopped going to shul when his father died, may have worked hard on purging the greenhorn from himself and becoming a true American. “But his kind of assimilation was not denying his Jewishness,” Mary Ellin Barrett says. “He was very much a Jew.” And his Jewishness permeated his songs.