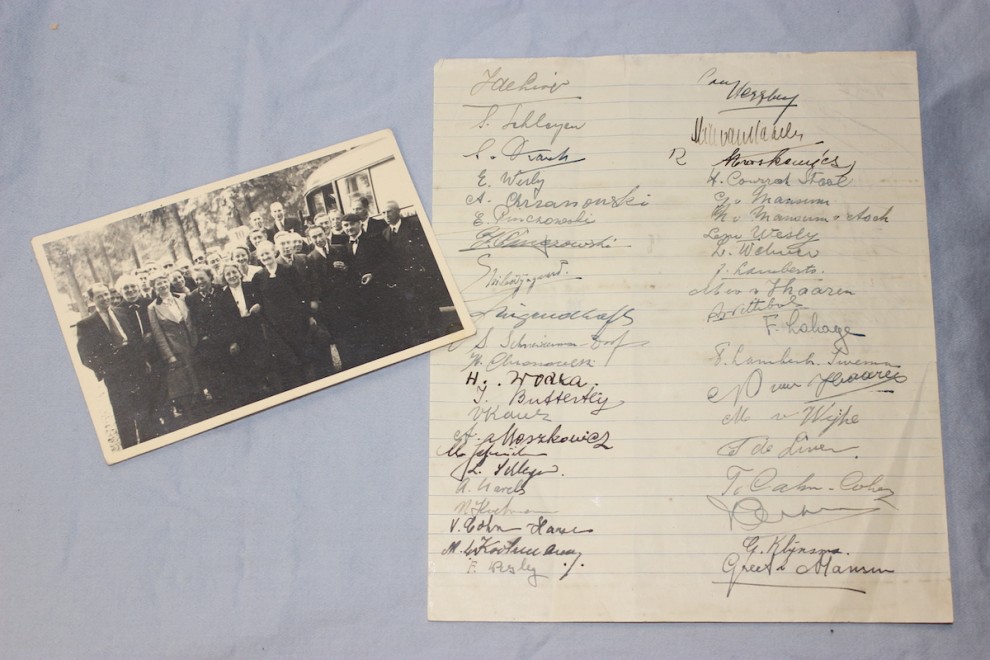 Archives provide evidence of activities and tell us more about individuals and institutions, they tell us the stories that make us who we are. They increase our sense of identity and understanding of our culture.

Throughout the program, archivist Teigan Goldsmith shared the stories of 12 items held by the Archives and families connected to some of the Archives’ items were in attendance to help reflect on the items and their histories.

“We mostly collect paper artefacts as an archive, but we’re unique in that we have 3D items, thanks to the forethought of those who donated them to the Archives,” said Goldsmith.

Items showcased ranged from a stereoviewer (for photos), a Bris gown, a top hat and more.

- From the mid-20th century, donated by David Kimmel.

- Comes complete with slides that show Shaffer’s Limited, a department store that operated on Rideau Street.

- Owned by Dina Edelson and used in the 1949 championship in Tel Aviv.

- Given to Lillian Bilsky Freiman (daughter of Moses Bilsky) by Frank Pots in 1939, accompanied by a letter that said the beret was made specifically for Ottawa servicemen.

- From Evco Pearls, a company led by Nathan Evenchick.

- Used in the Bodovsky butcher shop.

- Possibly travelled the furthest of the items, coming from Russia.

- Worn at the first recorded Jewish wedding in Ottawa, by Bernard Smith to wife Mina.

- Was located on Clarence Street in the market in the early 1920s.

- One of the largest items in the Archives, standing about four feet tall.

- At one point in the 1960s and 1970s, Pure Spring was selling a larger volume of soft drinks in Eastern Ontario than Coca-Cola.

- Sat inside Ottawa’s first synagogue for almost 100 years, dating back to July 1904.

- Represents the reason the Archives exist, given at the completion of Shirley Berman’s archivist trainings.

Participants were thrilled with the presentation.

“It’s amazing to hear so much history,” said Elly Bollegraaf.

Goldsmith encouraged attendees to look around their own homes at their personal belongings, to think about how they might be viewed as an archive of their lives.

The presentation can be viewed in its entirety here.