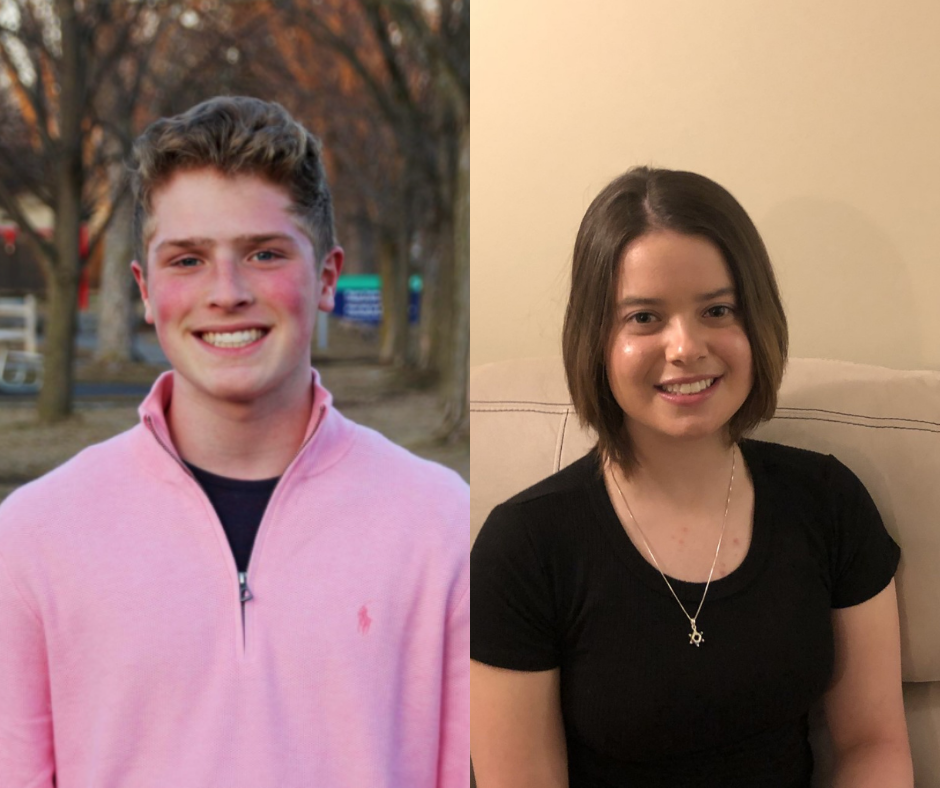 Miriam “Mimi” Braiter and Benjamin Shapiro (who happen to be first cousins), were the recipients of the Grossman Klein Teen Leadership Award, which is presented annually to two teens who have shown outstanding dedication and service to the Jewish community and to the community at large throughout their teenage years.

Mimi, a grade 11 student at Sir Robert Borden High School, is President of A Ripple Effect, an organization that pairs volunteer youth with children in need of friendship and support. Mimi has been part of this important program since its inception, over three years ago, and was a member of the board prior to moving into her current position.

In her role as President, Mimi supports Rabbi Mendelsohn in all aspects of the program and spends her time coming up with activities for the children and their families, organising fun teambuilding events for the volunteers and planning and promoting fundraising events like the Fun Run. She works directly with three families on a weekly basis, connecting online to do crafts and other activities with the kids.

Mimi has been part of Mitzvah Day, lent a helping hand to last year’s Israeli Women’s Night at the SJCC and was the Team Captain for her Relay for Life team at SRB.

An accomplished athlete, in her younger years, Mimi took part in a number of Jon Braun’s z”l after-school sports programs at the SJCC. After outgrowing the programs she became a volunteer helping JB with floor hockey a couple of times a week. She is a competitive golfer, and has been a volunteer coach at Rideau View Golf Course where she spent much of the golf season helping out with the children’s learn-to-golf programs and at golf camp.

Also a grade 11 student at SRB, Ben has spent more than 200 hours over the past few years at the Ottawa Kosher Food Bank, stocking shelves, preparing items for distribution, shopping for supplies and helping out on distribution days. He has co-chaired the Jewish Federation of Ottawa telethon, along with his family and, is a regular JFO and Mitzvah Day volunteer.

In his graduating year at the Ottawa Jewish Community School, Ben was President of the OJCS Student Council and the recipient of the Sarah Lithwick Greene Student Leader Award from Hillel Lodge.

In addition to his hours of volunteer service in the Jewish Community, Ben also dedicates his time to the community at large, logging over 40 hours with the Conservative Party of Canada’s local party candidates over the past year’s election. He has been a silver medalist honour roll student at SRB with a yearly average over 90%, is a DECA Participant (a high school club that prepares emerging leaders for

the business field post high school), he was awarded a leadership seminar opportunity at SRB for outstanding leadership qualities and was invited to apply for the upcoming Duke of Edinburgh’s International Award recognizing young people’s achievements in Canada.

Ben spent three weeks in the Andes and Amazon regions helping to build schools for under privileged children. A well accomplished young man, Ben is the son of Nikki and Michael and brother to Neilah, also a Grossman Klein Teen Leadership Award winner.

After serving two consecutive terms each both Rabbi Steven Garten and Dan Palayew are stepping down from the SJCC Board of Directors. The board welcomes Adam Garber as its newest member.