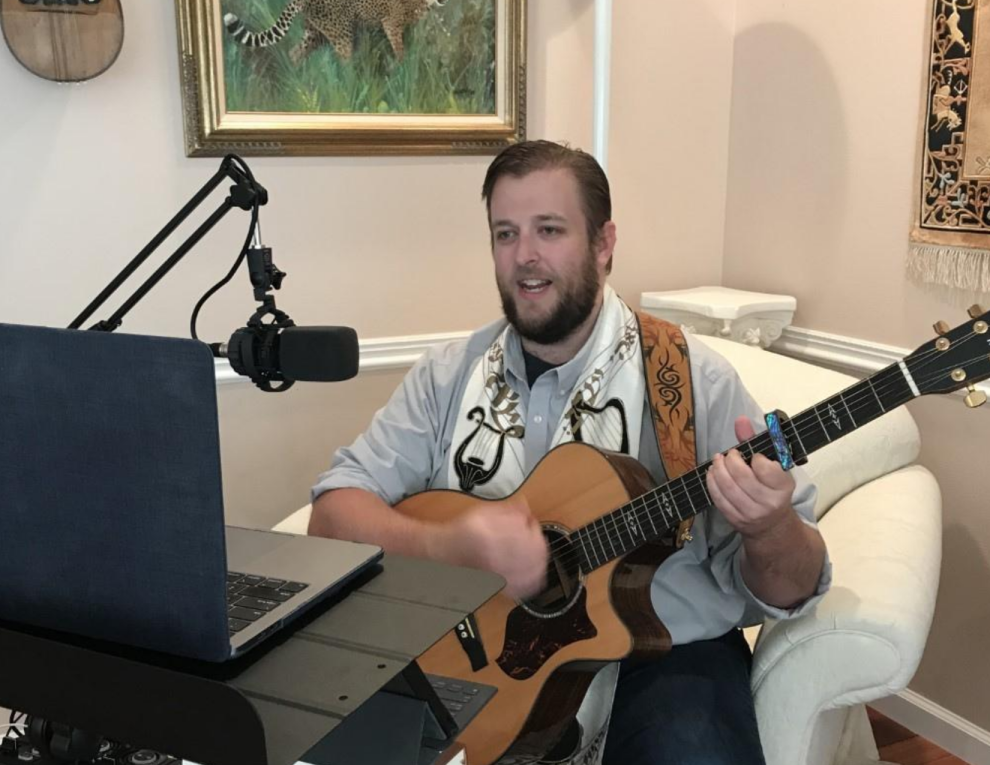 There are many unforgettable songs about Missouri, but it’s a unique year indeed when Temple Israel’s cantorial soloist will be singing High Holy Day tunes from Missouri.

At the time I’d planned a phone interview with cantorial student Daniel Geigerman in St. Louis, Missouri, he had to postpone to the afternoon because of an urgent cantorial school meeting.

The cantorial student for Temple Israel had just received a call that all his classes for Hebrew Union College-Jewish Institute of Religion (HUC-JIR), where he attends the Debbie Friedman School of Sacred Music, would be virtual for the entire upcoming year, his graduation year.

“We switched to virtual classes in the middle of March and then, before the Passover break, it was decided the rest of the semester would be completed virtually,” Geigerman said. “I was planning to visit my parents in St. Louis, Missouri for Passover and then I’d intended to go back.”

Realizing there would be no work or social activities for him back in Manhattan, he decided to remain in St. Louis, where, because of the pandemic, he is still based.

From 2008 to 2015, he worked at Congregation Shaare Emeth in St. Louis in many different capacities.

Since 2019, he had been travelling to Temple Israel about once a month from Jersey City, where he lived near his cantorial school in Manhattan, a 6.5 hour drive, which gave him time to sing in the car and consider his approach to services.

With the pandemic, though, he has been doing Temple services online from his parents’ living room in St. Louis, and will be doing so for the upcoming High Holy Days.

The positive outcome is that “we can actually use this opportunity to experiment and try new things,” he said. “I have a whole new audio setup from when I started virtually in March. Now I have this wonderful loop station which allows me to preload music tracks on it. I can hit play on part 1 and then sing a duet with myself. It allows me to sing both melody and harmony at the same time.”

The Temple Israel Choir is also involved in planning for the upcoming services.

“They help to lead the service and give it its soul,” Geigerman said. “We have a new conductor, Saeideh Rajabzadeh, who is absolutely amazing. Each service will have the choir on audio, put together by an audio technician. The congregation will be able to see all the choir members and be a part of it. I’m really proud of the amount of effort all the choir members are putting in. It required a lot of new technical stuff. It’s a lot to ask of choir members, and they’ve all stepped up and said they’re going to do it.”

“What do you mean cantor Daniel lives in St. Louis?” asks Rabbi Daniel Mikelberg of Temple Israel. “Witnessing cantor Daniel’s investment in the Temple Israel community has been inspiring. He brings a wealth of musical talent, a blend of traditional and innovative wisdom, and of course an enormous heart.

“Pre-COVID, he would drive 10-plus hours return to join us for a Shabbat. In the midst of COVID, he has virtually participated as if he were living in the nation’s capital. We are blessed to host him and look forward to continuing our journey alongside.”

Despite the challenges of his distance from Ottawa, “in a way it’s comforting to be in the home I grew up in,” says Geigerman, 33. “The virtual environment can be very sterile. It’s devoid of emotion or spirituality unless you create it. But it’s shown me that even in the toughest times, we can still reach out and create this holy environment.”

Back at home, he enjoys playing cards with his dad every night, and “there are two cats running around.”

“To be in this place, and not in New Jersey this year has relieved a lot of stress,” he said. “There’s a line in Exodus where God says, ‘Make Me a place for holiness and I shall dwell in your midst.’ It doesn’t matter how we connect – virtually or by smoke signal – if we choose to make it a holy place, God will be there.”