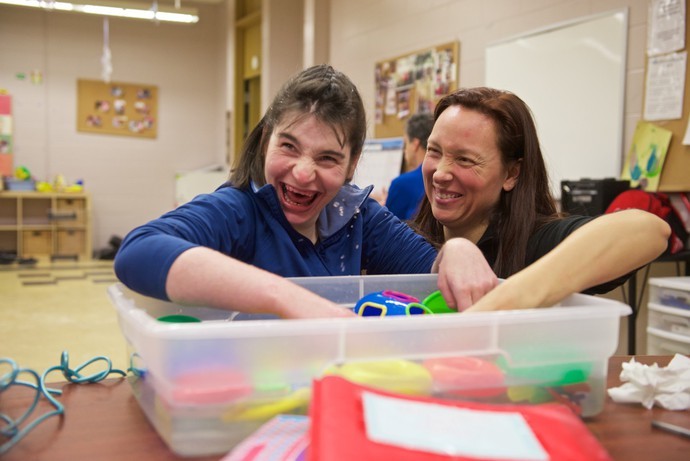 Just as the Ottawa Jewish Community Foundation celebrates its 50th anniversary, one of its largest beneficiary agencies, is also observing a milestone year. Tamir, which opened in 1985 as a residence for just three people, is now marking 36 years of assisting people to live their best life.

The proud and caring Tamir team, dedicated to helping people with developmental disabilities realize their potential, currently serves more than 100 residents, a feat helped by $130,000 in annual funding allocations from the Foundation.

“We offer Judaic programming, outreach for Jewish children in the community, camp programs … During the pandemic, we also developed sustainable programs for children to support people at home,” said Executive Director Risa Plotnik. “Foundation’s contributions helped with technology access especially during this time.”

The Ontario ministry sponsors Tamir’s basic programs and services, while funds from Foundation allow them to do more specialized Judaic programs “to be able to celebrate our culture and heritage,” said Plotnik.

“It allows us to be able to work directly and have targeted programs for the Jewish community. These wouldn’t be possible without the Foundation.”

Jodi Green, the Coordinator of Judaic Outreach and Inclusion, said Tamir tries to be comprehensive in their programming.

“It’s always about community and how we can bring in more programs about the community,” said Green.

“We want to bring religious practice to those who desire it and cultural practice to all of Tamir. We partner with synagogues and other related organizations. We try to spread Jewish values across everything. The values of being a good person, seeing the light in everyone, spans all cultures and religions. We serve more than just Jews, but culturally we want to bring the same values to everyone.”

Plotnik said that traditions, like what these programs bring to the community, are vitally important to help people “have a sense of who they are.”

“We want to maintain people’s faith and culture and individualism,” she said. “It’s all about inclusion. We want our people to be part of the fabric of the community. We want the Jewish community to be one. We want to include and be included.”

That’s why people like Lois Nudelman, whose son Mark is a Tamir participant, set up a fund through the Foundation that designates Tamir as a beneficiary. This fund, named in honour of her late husband, sister and brother-in-law, also serves to support the organization that has helped her family so much.

“The reason I started a fund was that I felt Tamir was not something that the average person is going to give money to. There are so many other important things in the community, like Federation and Hillel Lodge,” said Nudelman. “But when we came here to Ottawa we were fortunate enough to have Mark enter Tamir ... I thank my lucky stars.”

Plotnik said the Foundation’s funding helps people have “full lives and full meaning,” because faith and culture are such an integral part of a person’s being. During the pandemic, the Foundation’s funding has allowed them to incorporate families into their programming since programming became virtual or hybrid and enter the full home, rather than just the person in need.

“The staff is excellent, especially over the last year and a half with everything going on with COVID,” said Nudelman, who adds that having her son cared for at Tamir gives her tremendous peace of mind, knowing that even after she is no longer living, Mark will continue to be well cared for. “Tamir means that I can live in peace.”

Earlier this month, Tamir held a beautiful celebration to mark their 36th anniversary. To view one of the videos showcased during the event, visit here.