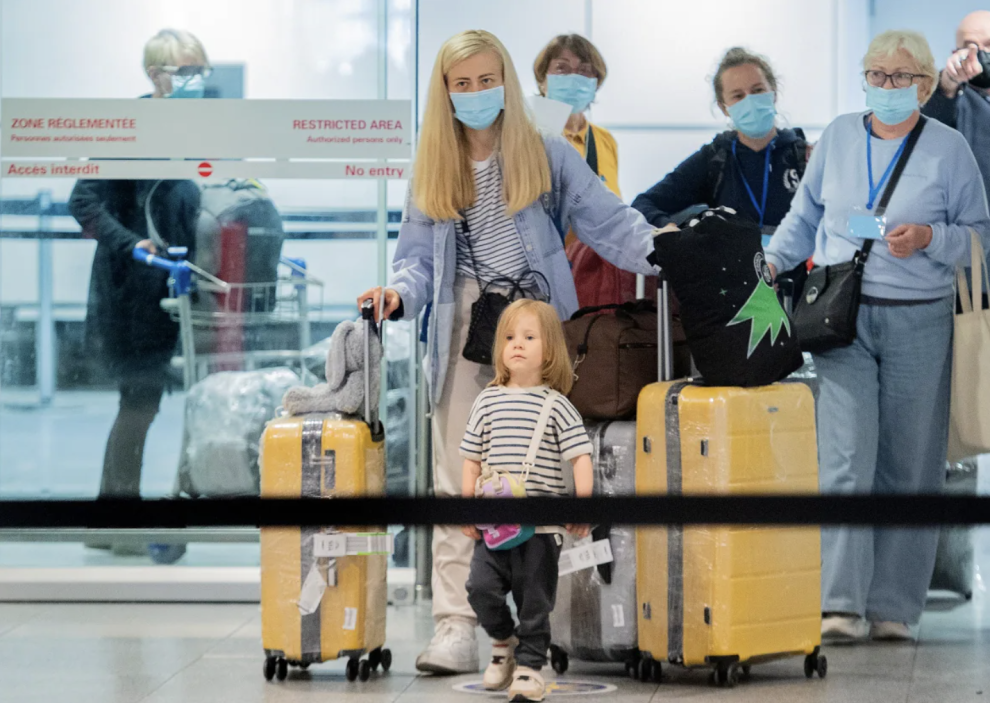 More than 100 days ago, Russian forces launched a war against Ukraine and millions of Ukrainians were forced to flee  — with some seeking safety here in Ottawa. Working quickly, Jewish Family Services (JFS), with funding from the Jewish Federation of Ottawa, put their resettlement services into action to help support Ukranians as they arrived.

Federation funding, along with an American Foundation, provided for the ability to hire new JFS staff to help manage a volunteer network as well as resources to help Ukranians integrate into the community.

“A lot of it is managing expectations,” said JFS’ Andrea Gardner. “It's a bit different from the refugees that we’ve supported in the past. Because of the pathways by which the government is bringing them in, they have a bit more resilience and independence. Their needs are different. The biggest need is housing -- they don’t need anything else until they have housing.”

Gardner said they expect that once these newcomers are settled and can think about everything else they might need, the volunteers who have come forward will be mobilized.

“The other complicated factor is we don’t know who’s here,” said Gardner. “There’s been secondary migrations from other cities, family members could bring  people over … We don’t have an accurate sense of numbers.”

One way JFS was able to begin to connect directly with Ukrainian newcomers and get a sense of their needs was through the city-sponsored free bus pass program.

“When that effort became public and the bus passes became available, JFS was a distribution point for those passes, so we had a better sense of what the numbers were. We had 150 bus passes given out in about three weeks,” said Gardner. “Before that, we knew there were many here but we didn’t know where they were or what the demographics were. They didn’t want settlement services, they just wanted to start their lives.”

Being able to meet the newcomers face-to-face helped JFS target their work, which included the development of volunteer-led Welcome Circles. Welcome Circles are small groups that take on various support tasks, from helping navigate systems like school registration to driving people to appointments for health cards.

Shari Silber is part of one of the Welcome Circles, and started volunteering in June, teaching English to four newcomers from Ukraine.

“Once I realized how much work was involved in helping these women and their daughters, I immediately contacted the Welcome Circle I had formed back in April, and, sure enough, everyone was excited to mobilize and begin helping out,” said Silber. “We worked with each of [the newcomers] to build their resumes, and have already found summer jobs for the teenage daughters. One member of our Welcome Circle is a real estate agent, so [they have helped] on the way to finding an apartment.”

For Silber, the work is important as she thinks back to past generations who came to Canada as refugees.

“They had to find their way more often than not with no help at all from government services, or the community at large,” said Silber. “I saw the atrocities taking place in Ukraine, and wanted to help in some way to make their difficult transition to life in Canada just a bit easier.”

Gardner said the “why” people volunteer is varied.

“Some of our volunteers have had their own experiences in moving. They may have been involved in having the Syrians come here, as far back as the Vietnamese coming,” she said. “I’ve had people approach me saying my family helped a Vietnamese family and I want my kids to have that experience. Other people just really want to help support a newcomer family because their parents were immigrants. The Jewish community, we were refugees … we weren’t always welcomed.”

Silber added that the courage from the newcomers is truly inspiring.

“The families definitely appreciate the assistance they are receiving,” she said. “The courage these women and their daughters demonstrate in the face of adversity is truly inspiring. I have gained so much perspective as a result of spending time with them.”

Gardner’s been able to make connections for specific services, like summer camps and memberships at the Soloway JCC, and cautioned that it’s important to remember this is still a new process.

“Hundreds and hundreds of Ukranians have arrived in Ottawa and they’re coming with their own journey and their own stories,” she said. “You have to approach quietly and carefully. We have to listen to what their needs are. It’s still early days. We’re still getting to know the community. We know that we can offer support, but you don’t want to impose it. When they’re ready, we’re here.